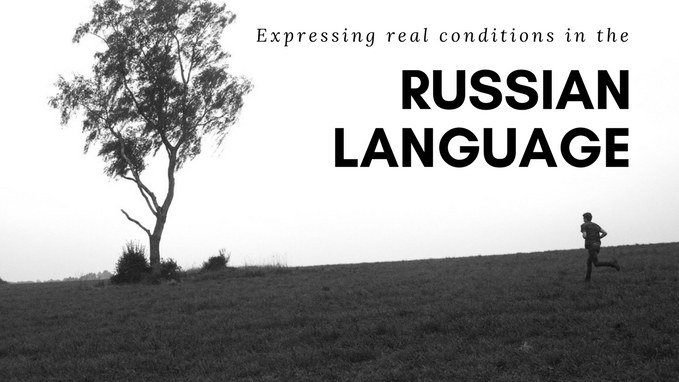 As in the video above let's pretend that we have a friend visiting from Kazakhstan, a country which speaks two languages: Russian and Kazakh. In English we could say something like:

If he speaks Russian everything will be fine.

This sentence  communicates the idea that our friend could or might speak Russian, but it's not certain. This is a real condition. It's completely possible that our guest could speak the Russian language.

To express the same sort of idea in Russian the grammatical construction is fairly similar to English:

Here the Russian word "Если" translates into the English "if".

This phrase translates to:

What shall we do if he doesn't speak Russian?

Notice again that "если" corresponds to the English "if".

A note about using the future tense with a real conditional

In English when we use real conditionals we use the present tense even if we're talking about a future action. Take a look at this sentence as an exampl​​​​​e:

If he calls, say I'm not here.

In this sentence we clearly mean, "If he calls in the future", even though we use the present tense calls instead of the future tense will call.

In Russian this doesn't happen. If you're using a real conditional statement about something that might happen in the future, use the future tense:

In Russian we use the future tense to express this statement. If we were to translate this sentence literally it would read: If he will call, tell him I'm not here.

Again, notice that in all the examples above, we are talking about things that are possible, things that might happen. This is the essence of a real conditional.

Now that you know how to correctly express this new idea, incorporate it into your next Russian practice session!