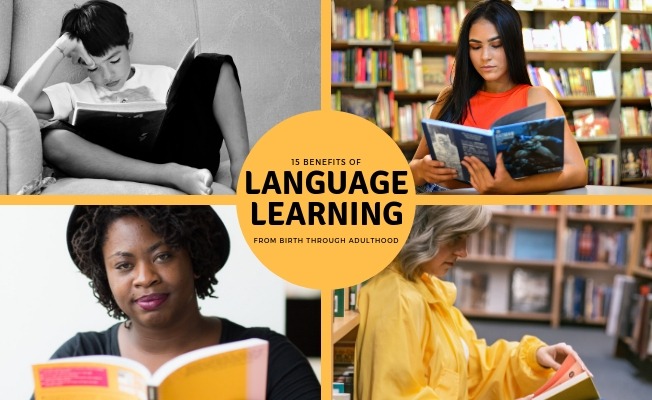 When I think of the benefits of learning a new language I usually think of the mental and academic rewards that come with learning something like Spanish or Japanese. Maybe If I ponder a bit I'll remember that there are probably some multilingual benefits in the workplace too.

But the truth is learning another language changes us in profound ways and affects every area of our lives, from early childhood all the way up to late adulthood.

In this post we look at 15 benefits of knowing another language, and how these benefits affect us in each season of life.

It's not just common knowledge that children who learn a language early on find proficiency easier, than us adults who try to pick up a new language later in life.

While experts aren't sure exactly how a multilingual environment affects the earliest stages of human development, it is evident that a language is more easily learned in an immersive environment from early childhood.

Attention control is the ability to choose what you concentrate on and what you ignore, and it is directly related to how we work, concentrate, and solve problems.

A study published with the American Speech-Language-Hearing Association found that children as young as 20 months could recognize words in different languages, if they were raised in a bilingual environment.

4) A different perspective of the world

The languages we speak literally influences how we see the world. From the way we see colors to our sense of direction, there's no part of us that isn't affected by language. Having two languages from a young age provides a more nuanced view of the world.

The brains of bilingual children handle new information more quickly and efficiently. This is because the two languages are "living" in their head simultaneously, and the bilingual brain must constantly choose between one or other based on what it hears.

On the study of bilingual brains: 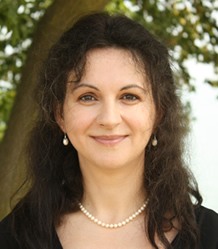 "It's like a stop light...Bilinguals are always giving the green light to one language and red to another. When you have to do that all the time, you get really good at inhibiting the words you don't need".

A study of over 120 children in two different countries found that the 62 bilingual children significantly out performed the others in the group in tasks related to arithmetic and creative problem solving.

This is also thought to occur because of the bilingual brain's ability to constantly switch between languages.

Another study in the UK showed that children who grow up speaking more than one language outperform other students in English and mathematics as early as seven years old.

Students who study a foreign language for one year or more showed significantly higher scores on the SAT than those who did not.

Below we show two graphs showing some of the results from that study. 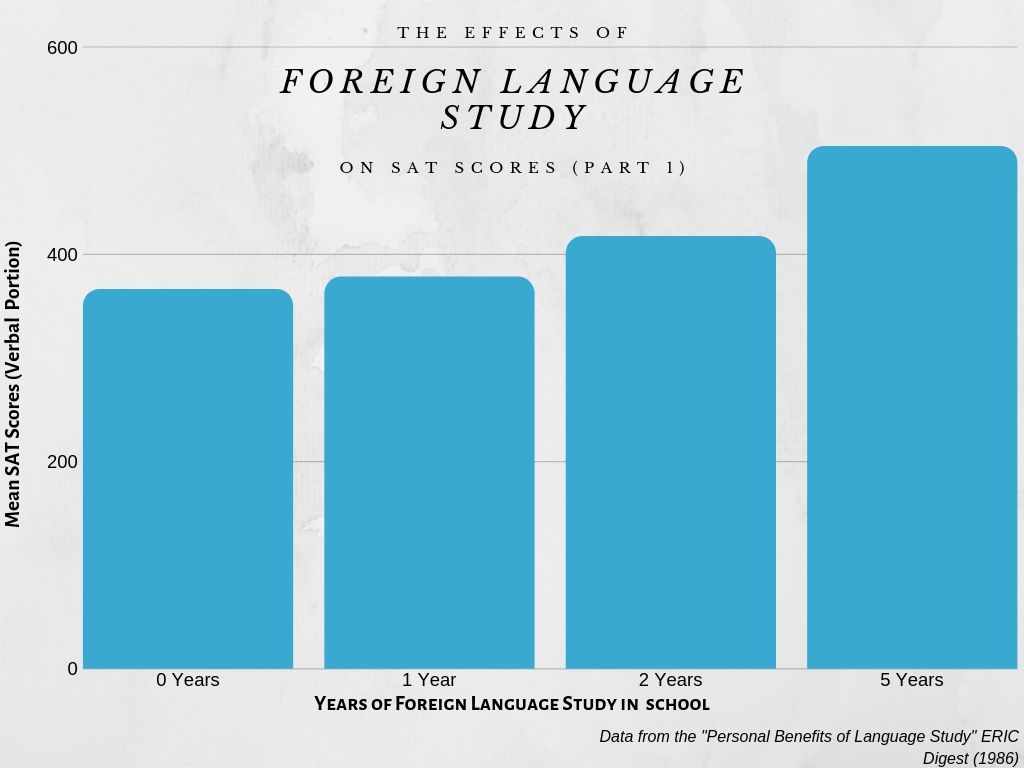 The students with higher scores in this study weren't necessarily bilingual, they simply studied a foreign language for a year or more.

You don't have to have two native languages to enjoy the benefits of language learning, even just a year of study can bring real rewards! 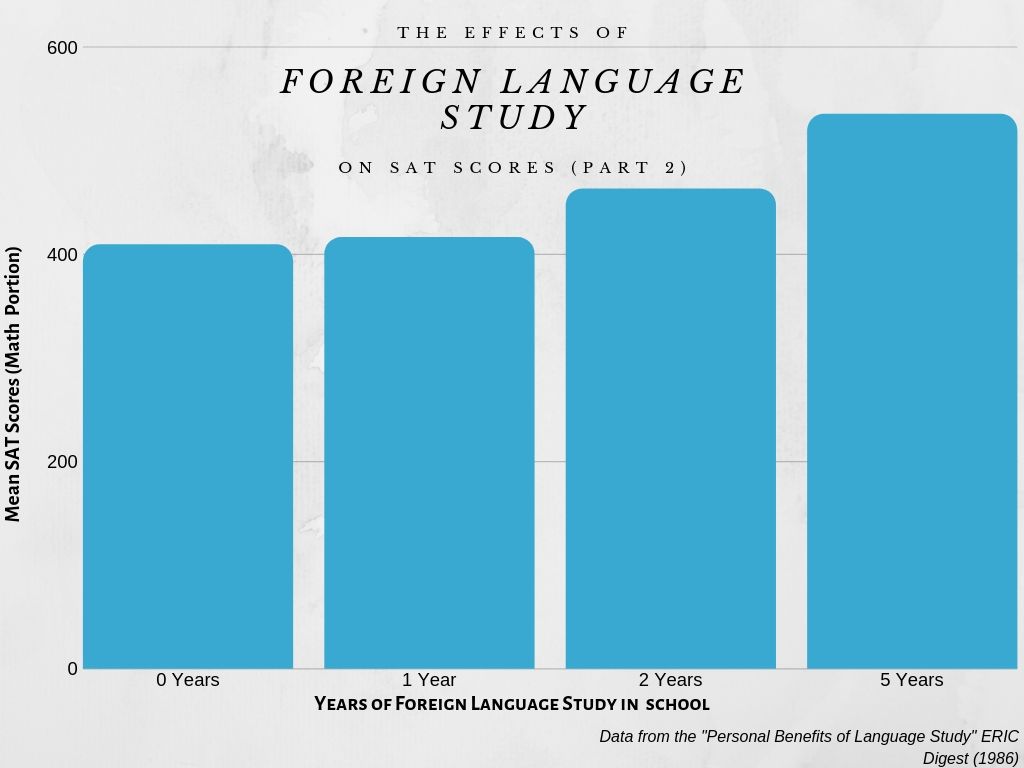 One of the defining elements of adolescence is identity. Knowing a second language can affect the way a teen develops his or her personal identity, or even help them develop a deeper personality.

9) Openness to other cultures

Whether or not a young person speaks a second native language  or simply studied a second language in school, their knowledge will open up different cultures to them in way monolinguals may not understand.

Teens who who know a another language are much more likely to be open to people with different cultural backgrounds and perspectives, a trait that can benefit them for the rest of their lives.

This is a skill closely related to multitasking.

As human beings we are notorious for being partial in our day to day decision making. Though inside we'd all like to think we function from a place of unbiased logic and discernment, that just isn't always the case. 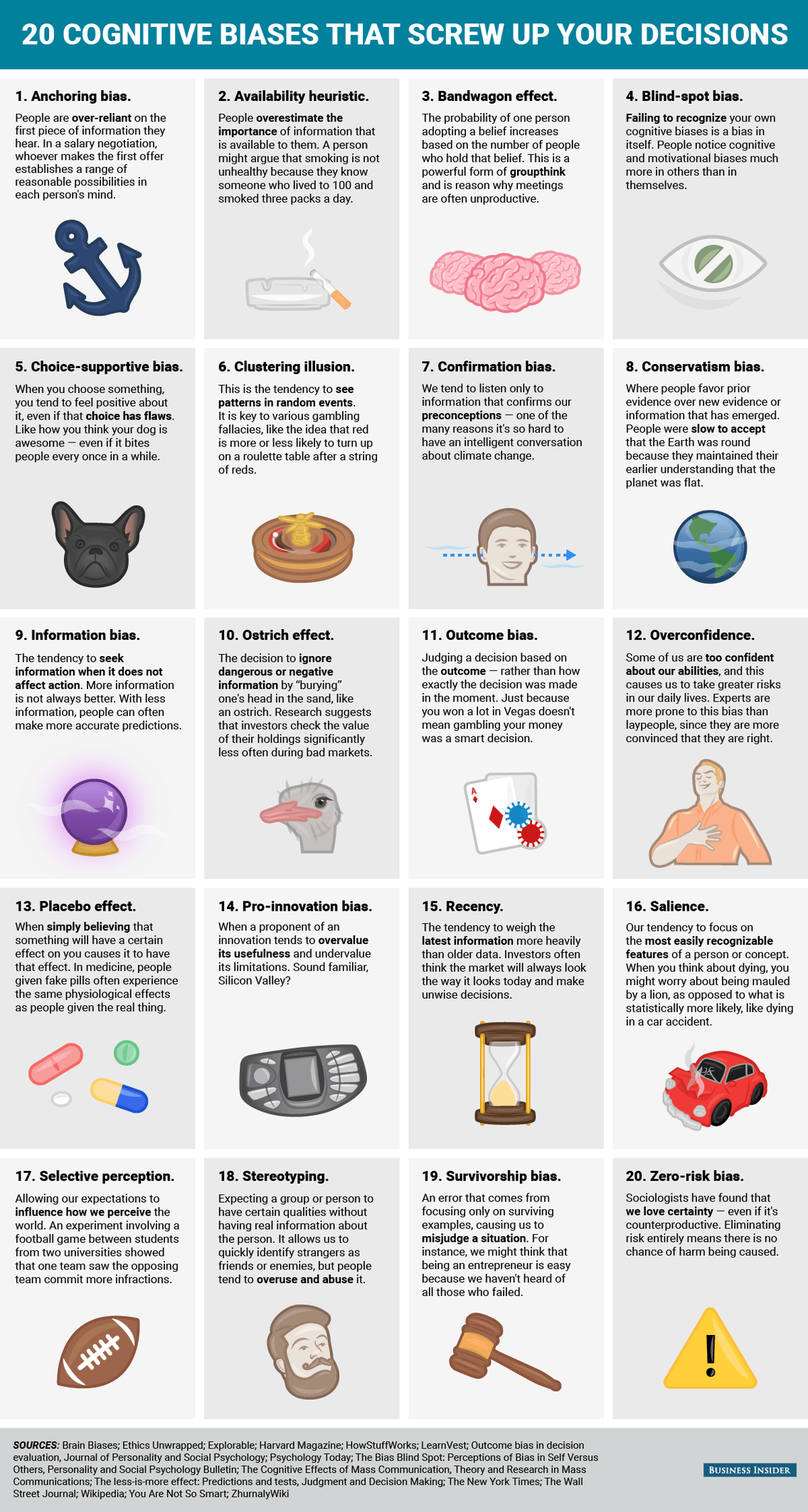 Surprisingly enough speaking more than one language can help with this. Studies have shown that bilingualism actually reduces our decision biases.

According to a study carried out by Harvard and the Federal Reserve Bank of Philadelphia, workers who know a second language are likely to make more money than those who do not (though the difference in income averaged somewhere over 2%).

Knowledge in specific languages can boost your take home pay considerably, depending on your field. Proficiency in German can increase your salary by as much as 4%, and there is a high demand for competency in Asian languages in fields as diverse as law and business.

This brings us to our next point. If you're highly proficient in a second language it can open the doors to more job opportunities.

Translation and interpreting has been cited as one of the fastest growing sectors in the US labor market.

Knowledge of a second language opens up entire cultures to you. It's one thing to go on an English speaking package tour of a foreign city.

However if you have the freedom to freely communicate with the locals it opens up an entirely different (and more rewarding) experience.

Remember that 2% or so difference income we mentioned when we said those who know a second language are likely to earn a higher income?

Well, some of the folks at the Economist calculated that if you invested that extra 2% for retirement, assuming a 1% increase in real salary every year, and a 2% average real return over 40 years, that 2% difference would become $67,000 (thanks to compound interest).

Languages like French and German yielded an even higher amount, because the income of bilingual speakers in those languages is above the overall average of 2%.

Below is a chart from the Economist article showing the calculation results in pounds sterling (not dollars). 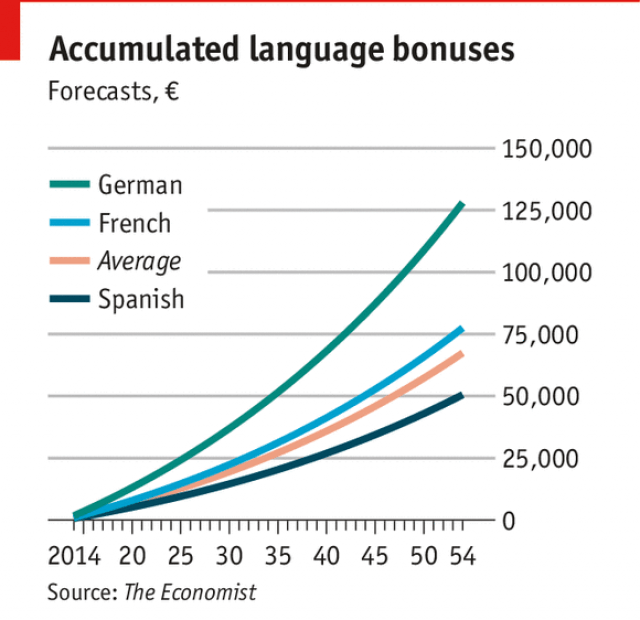 Not bad if I do say so myself. Whoever said learning a language couldn't be fun AND profitable!

Studies have shown that bilingualism is a significant factor in delaying the onset of dementia, including Alzheimer's disease. Patients who speak more than one language were diagnosed with Alzheimer's an average of 4.3 later than their monolingual counterparts. Bilingual patients also displayed symptoms as much as 5 years later as well.

More than just delaying cognitive decay, multilingualism helps protect the healthy functions of the brain, most notably our memory. Adults who use multiple languages have been shown to have a more resilient memory in their old age, allowing them to recall past events better than adults of the same age who speak one language.

Whether we realize it or not, language touches every part of our day to day lives. It affects our career, helps shape our personality, and it can even influence our health and personal relationships.

It's no surprise then that learning a language touches not just our brain, but also our body, our mind, and ultimately our heart 🙂