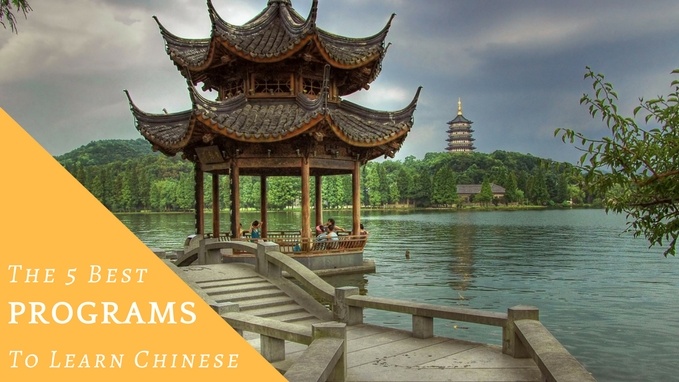 It's not easy to find a good program for learning Chinese...

A lot of companies put a "Chinese Mandarin" label on their Spanish or French course and call it a day. As a result Mandarin often doesn't get the care and respect it deserves as a unique language.

This really doesn't help the learner. The way you learn Spanish is not the same way you learn Chinese. Mandarin has it's own set of grammar rules, pronunciation, and other nuances.

In order to make a good Mandarin course a language learning company really has to go the extra mile.

In this article we'll look at our five top picks for Chinese programs, but first we should probably talk a little bit about just what exactly makes a program good for learning Mandarin....

1) It does a good job of teaching Chinese grammar

In the beginning phases of learning Mandarin the grammar is surprisingly similar to English. Basic Chinese phrases will share the same subect-verb-object (SVO) word order that is found in English.

A closer look at some of the intricacies of Chinese grammar

However once you're past the basics, Chinese word start to look a lot different than English, making it difficult for native English speakers.

Chinese Mandarin also features some other foreign aspects of grammar like resultative verb compounds and polysemy, but we won't get into those here.

The important thing to remember that a good Chinese course will make an effort to explain and breakdown the more difficult parts of grammar.

Mandarin is a tonal language. This means the same sound spoken in a different tone (think voice inflection or pitch) will completely change the meaning of a word. Thus tones are extremely important when learning Chinese.

An intro to the Chinese tones

Some language courses overlook this and fail to break down the tonal system, and don't help learners learn correct Chinese pronunciation. A good learning program will give adequate attention to this highly important topic.

The Chinese writing system doesn't use an alphabet. Instead Chinese characters are logographic, meaning that they represent words or phrases and not sounds (as in the English alphabet).

This means that to read Chinese you have to memorize a large number of characters (think 2,000-3,000) just to read a newspaper.

An excellent explanation of Chinese characters

Theoretically you don't need to know Chinese characters to speak the language, but if you're serious about being fluent you won't be able to avoid them forever.

When you're learning Mandarin it's best to start learning characters early on, so that you give yourself a solid foundation from the get go.

A good Chinese program will help you learn the Chinese character system.

Our picks for the best Chinese learning programs

Rocket Chinese is built around recorded audio in the form of dialogues. The dialogues have English explanations and usually teach the language in "chunks" or phrases versus individual words (this is great for conversational Mandarin).

However Rocket Chinese does more than just prepare you for conversations with native speakers. It also teaches Chinese characters, even in the earliest parts of the course. I have yet to find another Chinese course or program that does this.

Over all Rocket Chinese does an excellent job of comprehensively teaching  Mandarin, so that learners are exposed to speaking, listening, reading, and writing in the language. For this reason Rocket Chinese is number 1 on our list.

On Chineseclass101 lessons are set up as individual podcast episodes. Each episode is built around a practical conversation between two native Mandarin speakers.

The hosts of the show breakdown the vocabulary and grammar that is used in the dialogue, and they also add fun and interesting comments or cultural anecdotes to keep things interesting.

The site also features a host of learning tools, including in site flashcards for memorizing characters and new vocabulary; as well as a resource section dedicated to learning Chinese characters.

Pimsleur is essentially an audio only program (don't expect to learn any Chinese characters with it). Pimsleur is made up of 30 minute lessons centered around a Chinese dialogue.

But Pimsleur is not your typical Chinese audio course. It uses a unique question-recall-response method that forces learners to use the language similar to the way the would if they were speaking with a real person.

Pimsleur is also the only audio course that focuses heavily on correct pronunciation. Words and phrases are broken down into syllables, as the course walks you through the natural pronunciation used by native speakers in everyday language. There is a special emphasis placed on the Chinese tones as well.

If you're big on being conversational and developing a good accent in Mandarin, then Pimsleur is probably the program for you. We only wish it featured a reading and writing section so we could put it higher on the list!

Rosetta Stone is THE household name in language learning. Even so, we're often not quick to recommend their courses.

You see, the effectiveness of Rosetta Stone depends on which language you're learning (it's especially bad for Japanese and Arabic for instance).

When it comes to Mandarin, Rosetta Stone brings a decent course to the table. There's a few reasons why...

As we said before Chinese grammar is similar to English grammar (at first at least). Thus Rosetta Stone does a good job of helping you learn the foundational grammar of Chinese. It does so implicitly (there's no English used in the RS method).

Also the program isn't bad for picking up the natural flow of tones in Mandarin. Great emphasis is placed on speaking tones correctly in the context of full phrases. A lot of courses simply teach tones with individual words, and full phrases or sentences.

Rosetta Stone comes in at number four because it doesn't cover written Mandarin very well, and the course has little to offer once you get past the basic levels of the language.

Fluentu is a site that helps you learn a language through native videos.

You can use in site flashcards, captions, and games to learn new words in context while watching Chinese TV shows, movies, commercials, and more. It's a great way to push your listening skills and your Mandarin vocabulary.

FluentU isn't very structured, and is really more of a learning tool than a full on program. It's better for reviewing what you already know, while teaching you new words and phrases along the way.

It's definitely a unique approach to language learning that's worth checking out!

There are a lot of language courses out there, but not all are made equal. A good Mandarin course is one that respects the language and teaches it according to its unique features.

Hopefully this list will help you find the program that's right for you. Either way, remember that  Whichever method you use isn't as important as committing yourself to learning the language!