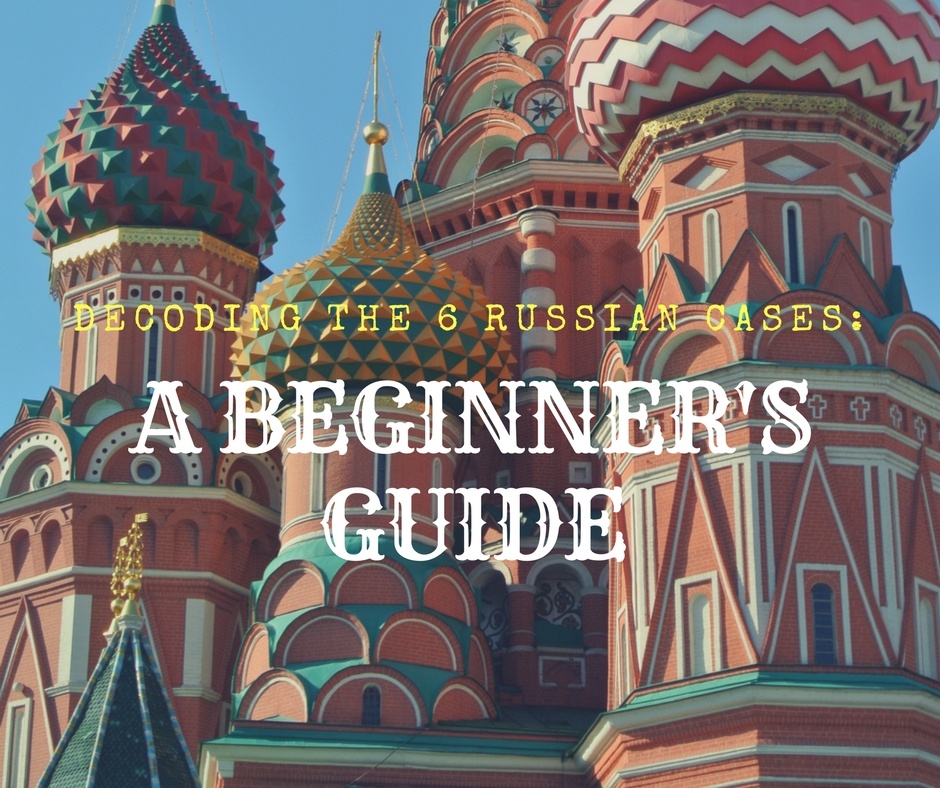 When I started learning Russian, I had never even heard of cases and I definitely didn’t know that Russian had six essential ones. Looking back, I’m glad that I came in blind because I might have been discouraged had I known how difficult the grammar was.

Five years later, I realize how important and helpful the case system is. Cases tell us what job a noun has in a sentence. In English, we depend on word order to give sentences logic, but Russian cases make it possible to put words anywhere in a sentence and have it still make sense.​

What are the Russian cases?​

Nominative form is the most basic version of any noun, adjective, or pronoun in Russian. It’s the way words appear in the dictionary. We use this case to identify the subject of a sentence.

Who is very smart? Anna.

We use the genitive case to show ownership.

Where you would use an apostrophe s (‘s) in English, you use the genitive case in Russian and you put the word in genitive AFTER the subject.

This is Anna’s dog.

Whose dog is this? Anna’s.

We also use the genitive case to denote an absence of something.

The dative case shows the indirect object (recipient of the action) of the sentence.

I (feminine) gave the book to Anna.

To whom did I give the book? To Anna.

Use this case to talk about your likes/dislikes!**

Literally: Tea is pleasing to him. (He likes tea.)

**In this format, the thing that you like/dislike is the subject, and you are the recipient of the action. So make sure the verb agrees in number and gender with the subject.

We use the accusative case to denote the object of a sentence.

This case is action packed and you can use it to communicate what you bought, love, do, etc.

Whom do they love? Anna.

This case is also used to denote motion in a certain direction.

I (feminine) went to school.

School answers the question Куда/Kuda/To Where?

This case is so named because it tells us which “instrument” was used to complete an action (by what means). It also tells us with whom/with what an action occurred.

I (feminine) ate dinner with Anna.

With whom did I eat dinner? (With) Anna.

This final case is used for giving descriptions and locations.

Nouns in this case often come after the prepositions В (In), На (On), and O/об/ (About). (Depending on the initials letters of the word that follows, the preposition O can be pronounced Ob or Oba.)

He is talking about Anna.

About whom is he talking? (About) Anna.

The plate is on the table.

Where is the plate? (On the) table.

(On the) table answers the question Где/Gdye/Where?

There are six cases. Each case answers specific questions.They only affect nouns, adjectives, and pronouns. Cases change a word’s function in the sentence. Declension/declining is when you change a word’s case.

When declining a word, you have to consider its gender, number, and state (animate vs. inanimate). One word can have many different declensions or forms.

Confused? Just break it down one case at a time.​

Here are some resources that I use for grammar help:

russianlessons.net - This site tells you how each case is used and formed, plus it gives you a personal pronouns chart for each case.

alphadictionary.com - This website has very brief explanations for each case, but most importantly: quizzes! You can test yourself online using multiple choice and fill-in-the-blank exercises.

ReversoContex﻿t - This one is actually a dictionary, but it’s my most frequently used app when I’m in Russia and when I’m doing Russian homework. It collects example sentences from all over the web and tv. When I don’t remember how a certain noun declines, I can just search and it’ll give me tens of examples.

That was just a brief introduction to the Russian cases. You should now understand what cases are, how many are in Russian, why they’re important, and what they do.

Like I said, if you break this lesson down into manageable pieces, you’ll be declining like a native in no time! Let me know in the comments if you have any questions!