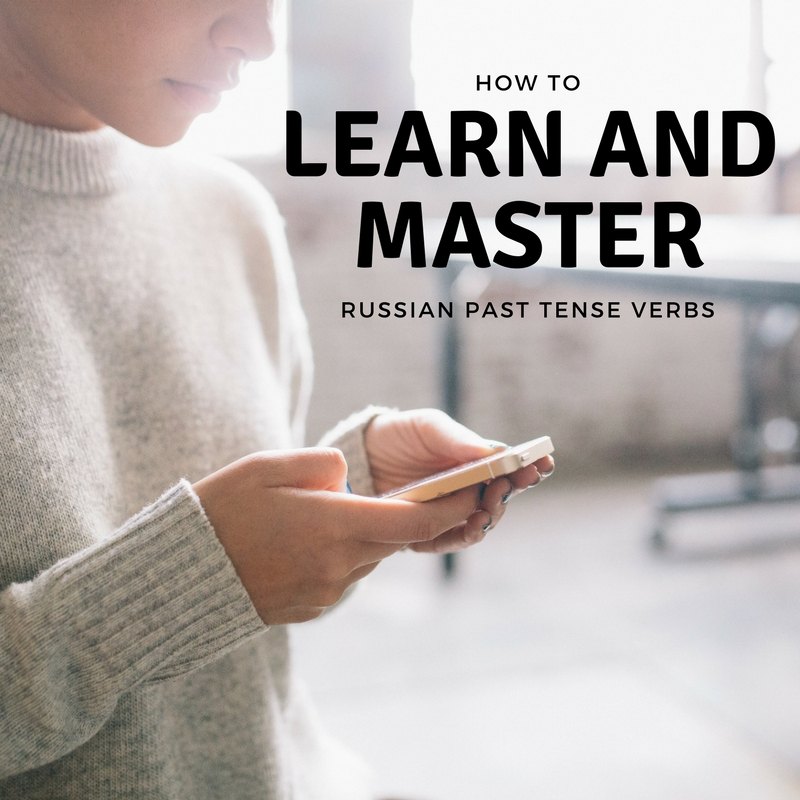 How to Learn and Master Russian Past Tense Verbs

At this point, I don’t need to tell you that Russian grammar is complicated. Verbs are no exception, but fortunately conjugating in the past tense is rather simple.

Whereas some languages have compound tenses (had done, have done, have been doing, etc.), Russian only has two options for past tense verbs.

Keep reading to learn how to work with these forms!

Forming the past tense is easy. You just take the stem of the verb and add one of the four potential suffixes according to number and gender.

When conjugating in the past tense, start with the stem that comes from the infinitive because the present tense forms often change.​

The following verb endings drop the л/L ending in masculine singular forms.  The other forms follow the normal past tense rules.

He brought a gift to the party​

If you've ever used a Russian dictionary, you'll have noticed that there are two Russian verbs listed for every English verb.  This is because Russian verbs have a characteristic called aspect that tells us how often an action occurs and its status (completed or incomplete).  There are two options for aspect in Russian: imperfective or perfective.

Let's look at the two aspects together and then separately.

​The sun was shining WHEN ALL OF A SUDDEN lightning struck a tree.

The verb in the first part of the sentence is in the imperfective form because it tells us what was happening before something else (the perfective verb) happened and changed the situation.

Now let's break it down.

The imperfective is used for prolonged actions and also habitual ones.

Example 1: What were you doing?

I was doing my homework.​

There is no indication that you've finished the homework, so use the imperfective.

Example 2: What did you do all day yesterday?

I was watching old films.

Use the imperfective here to show that this process took place over a long period of time (all day).

Example 3: What did you (like to) do when you were little?

I would/used to show (my) friends my comic book collection.

The imperfective here marks a habitual, past action.​

We were talking to Grandma when you called.

Here we use the imperfective to show an ongoing action ​that was interrupted by a perfective action.

Example 5: What did she used to buy?

She used to buy white bread, but now she buys black bread.

Once again, we use the imperfective to show a past habitual action. ​

Use the perfective to denote a successfully completed action whose result is known.

These are all one-time, successfully completed actions.

Russian speakers will often use the questions Что делал/сделал (Shto delal/sdelal) to explain aspect, but that can be confusing to English-speaking students.

Think of it this way:

The imperfective is like a movie that's playing (or in progress).

The perfective is like a photograph, or a one-time snapshot of a single moment.

We don't know whether Oleg passed or failed the exam, so use the imperfective.

Nastya took (and passed) the exam.

We know that Nastya passed the exam, so use the perfective.

Я не написала.  Ya ne napisala.  I didn't write (but was supposed to).​

Here are a few suggestions for ways to really master the past tense.

Pick a personal experience and write it out using a dictionary. Then read it to a native speaker (this can be a teacher, language partner, or friend) who can correct any mistakes.

Practice your story with as many people as possible until telling it becomes second nature.  After that, pick another story and start the process again!

Find an English-language show you ​like and watch it with Russian subtitles (this is easy to do with streaming services like Netflix).  Pick a few scenes where characters are speaking in the past tense and copy down the subtitles.

Analyze the phrases you wrote down to see when to use imperfective vs. perfective.  Then, try coming up with similar sentences.

Even though your teachers might not love Wikipedia, it's useful for language learning because it has millions of articles on various topics. Pick a subject you're interested in and try reading it in Russian.

Since it's an encyclopedia, there will be plenty of uses of past tense describing previous events.  For an extra challenge, only use a dictionary as a last resort.  If you need help, refer back to the English language version. ​

Here are some online resources that I've found particularly helpful when practicing the past tense.

This website has very simple explanations for many Russian grammar topics.  The page on the past tense is especially helpful and I especially like how they explain aspects.

I've been using alphadictionary.com since I started learning Russian five years ago.  There are hundreds of charts for every grammar topic, but the biggest draw is definitely the exercises.

Simply type your guess into the box.  If you're correct, it'll tell you so.  If you're wrong, it'll give you a hint.

I normally use this site to study its list of Top 500 Russian Verbs, however its grammar lessons are short and to the point.

I would​ recommend checking out the Past ﻿Tense page and the Aspect ﻿page, both of which have simple explanations and a few small quizzes.

The Russificate Blog is run by a Russian teacher and features a ton of articles and exercises in Russian, as well as some podcasts. They have some great stuff on the past tense and verbs in general.

As you can see, forming the past tense is pretty easy; it's just getting the hang of when to use the imperfective vs. perfective that takes some time.  If you have any questions, let me know in the comments.

If you use the suggestions and resources I've laid out, using the correct verbal aspect will soon be a breeze!