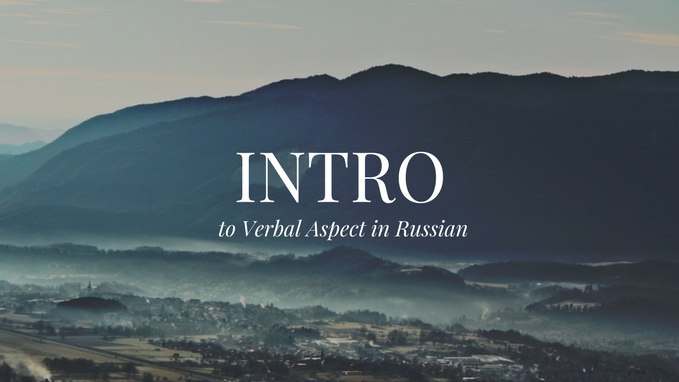 Intro to Verbal Aspect in Russian

Typically in English we don't care whether or not an action in the past has been completed. If you say "I read a book", it could be that you read the whole book, but it could also mean you read through some of it but never finished it (depending on context).

Russian verbs make a distinction between a completed action and a general or uncompleted one. In fact, for just about every past tense English verb there are two different Russian verbs: one that specifies the past action was completed while the other doesn't.

The Russian verbs that imply that an action was completed are called perfective verbs. The ones that don't specify completion are called imperfective (in this instance think of perfect as meaning complete, rather than without error).

Perfective verbs are used for:

Imperfect verbs are used for:

A closer look at verbal aspect:

Perfective verbs are not used in the present tense

This makes sense if you think about it. If an action is occurring right now it can't be completed yet. Therefore the perfective aspect doesn't make much sense when describing a present action.

There are four basic patterns for the forms of perfective and imperfective verbs:

Unfortunately there's no sure fire way to predict which prefix you'll need to turn an imperfective verb into a perfective one.

Sometimes an imperfective verb is changed into a perfective one by changing the ending to the stem of the word.

Again, this change isn't something you can reliably predict. You simply have to learn the verbs as pairs and get comfortable with each of them.

Sometimes the pairing of perfective and imperfective verbs doesn't fall into either of the previous three categories, so we put them into a forth "other" category. Verbs in this group can differ widely in the changes between the two aspects.

The concept of verbal aspect can take a little while to get used to. We just don't have much of an equivalent in the English language. When you throw in the fact that the perfective and imperfective verbs can't easily be predicted by any sort of rule or overarching pattern, it all feels even more difficult.

But there's no need to despair. The more you use verbal aspect the more natural it will feel. The best approach to learning perfective and imperfective verbs is simple: take it one step at a time.

From here on out do your best to learn Russian verbs in pairs (imperfective/perfective). Practice using both forms with your Russian teacher or language partner.

After a little while it will be easier to remember the pairs and you will start to intuitively feel the difference between the imperfective and perfective aspects.