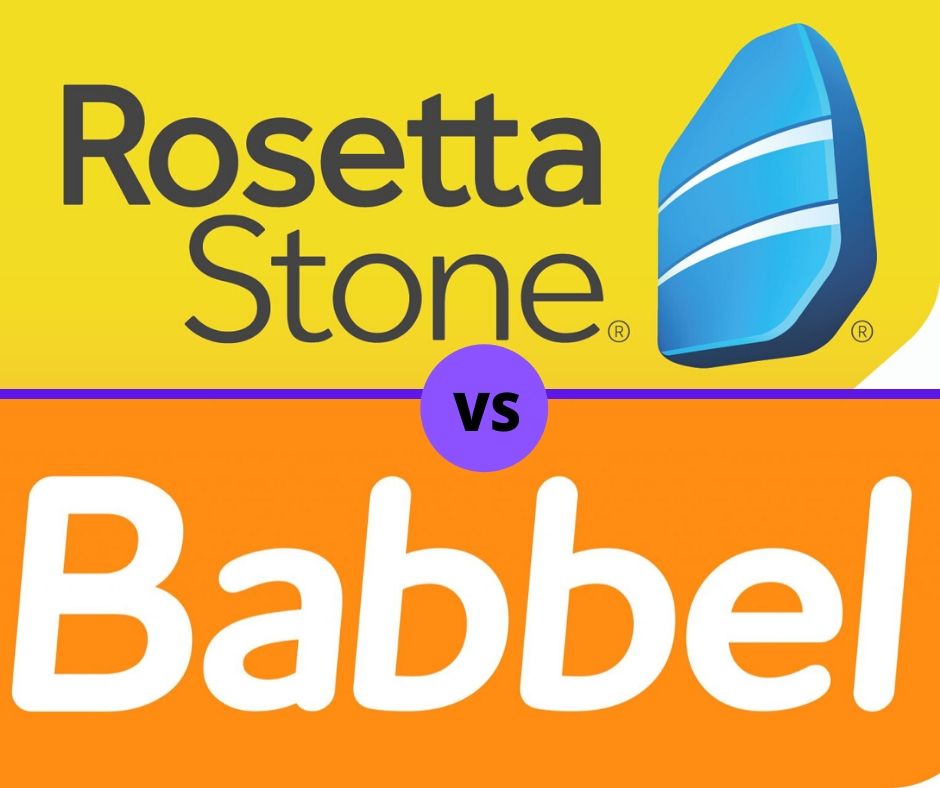 In this post we compare and contrast two of the biggest names in language learning: Babbel and Rosetta Stone. We'll take at look at their methods and discuss their strengths and weaknesses.

This post gives a general overview of each course while comparing them to each other. If you would like a more in depth review of either program you can look at our individual review of Rosetta Stone or Babbel.

Without further adieu lets get into our course comparison of Babbel vs Rosetta Stone!

For well over a decade Rosetta Stone has been a household name in language learning. The Rosetta Stone method follows a zero English approach to teaching you a foreign language (meaning there are no translations or English explanations in the course).

Using a combination of images and audio, Rosetta Stone aims to teach foreign languages through context versus through translations.

Rosetta Stone courses used to be entirely software based (meaning you had to purchase a physical CD or download the program to your computer). However courses are now offered through online subscription so users don't need to buy the course outright.

Rosetta Stone's method uses absolutely no English, and tries to follow an immersion based approach. Users are shown images which are paired with words in the foreign language. Users then have to induce the meaning of the words from the photos they are shown.

For more complex phrases Rosetta Stone often supplies a series of images which tell a story, giving more context to the user as to what the new phrases mean. 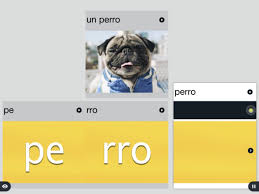 The strength of this method is that it helps users learn a language without translating words in their head.

With Rosetta Stone you learn that the furry little friendly creature in the photo is a perro. Thus your mind doesn't have to translate perro into dog and then dog into the mental picture of a furry creature.

Theoretically this method cuts out the extra step many language learners make of translating phrases from their target language into their native language before speaking or reading.

For many foreign languages Rosetta Stone does a good job of teaching basic vocabulary and grammar. The method is memorable and non threatening for new language learners.

Rosetta Stone's no English approach is a strength as well as a weakness. While this method works well for basic phrases, once users start approaching more complex grammar and vocabulary the method breaks down a bit.

The meaning of phrases and words becomes unclear, and the language learning process devolves into a guessing game with no straight answers.

Rosetta Stone offers a no pressure approach to language learning,  which can be  a plus for users who are completely new to learning a language and feel intimidated.

However for others, this approach can be detrimental to the learning process, as there is little to no pressure to recall any of the information you learn. Rosetta Stone often holds learners' hands to the point where they never learn to take steps on their own in a foreign language.

Babbel's languae lessons come in a quiz based format, and are offered through Babbel's online site or mobile app. Each lesson teaches new vocabulary and grammar, as users are asked questions to help them retain the new information.

Babbel courses use text, pictures, and audio in their lessons. Quiz questions can take the form of multiple choice, matching, or fill in the bank exercies.

When comparing Babbel vs Rosetta Stone it's important to point out that Babbel provides explanations and translations in English throughout their lessons.

Is good for learning the basics

Like Rosetta Stone, Babbel is designed to help users learn the fundamentals of a foreign language. After completing a Babbel course users can expect to walk away with a working knowledge of grammar and core vocabulary in their target language.

Breaks down grammar and vocabulary

Babbel makes a concerted effort to explain new grammar and vocabulary to its users (in their native language). With Rosetta Stone there's always a chance a user could misinterpret a word or phrase, or simply not see any connection to a given phrase and the pictures that go along with it.

Babbel doesn't run this risk. New material is explained, broken down, and translated for learners. Whole lessons are dedicated to new grammar concepts.

Babbel presents learners with new information at a faster pace than Rosetta Stone. Both methods do their fair share of hand holding with their users, but Babbel is able to move a bit more quickly through a language because it offers translations and explanations.

Low price and money back guarantee.

Compared to Rosetta Stone and other higher priced competitors, Babbel's price point comes in on the lower end of the spectrum. Monthly subscriptions start at $6.95 per month. There's also a 20 day money back guarantee, so users have sometime to use the course and see if it's right for them.

Some languages don't have as much content (and no Asian languages)

Babbel doesn't offer courses for Asian languages such as Japanese, Chinese, or Thai.

Babbel courses present new information and then quiz you on it. Depending on your learning style this may or may not be helpful in helping you to retain the information.

Ask any veteran language learners, and they'll tell you that there's a big difference between memorizing vocabulary and grammar, and then using them in a real life conversation.

Ever meet someone who took four or five years of Spanish in school but still has trouble speaking the language? That's my case and point.

Unless a course gives users the opportunity to produce their own sentences (either written out or spoken), he or she will struggle to produce sentences when speaking with a real person. Babbel simply doesn't offer users that opportunity.

Babbel vs Rosetta Stone: Which course is better?

Depends on the language you're learning

When it comes down to Babbel vs Rosetta Stone which one is right for you depends greatly on which language your learning. Some languages may not be offered, while others may be offered but have little content.

Also there are some languages that don't work well with Babbel or Rosetta Stone's methods (particularly languages which are further from English on the linguistic family tree).

Popular languages that work well on Rosetta Stone or Babbel

The majority of most popular foreign languages are available on both RS and Babbel, and work well with their respective courses.

When Babbel and Rosetta Stone were designed, they were designed with the romance languages in mind. This is because languages like Spanish and French are closely related to English and immensely popular among those learning a new language.

So most companies designing a language course do so around these languages. If you happen to be learning one of these languages then it might be worth checking out Rosetta Stone or Babbel.

Popular languages not available on Babbel

The following languages are not available on Babbel.

Rosetta Stone really struggles with languages that are distant from English because of its no English/translation approach. Sometimes a foreign language's grammar is so different from English that it needs to be explained.

Rosetta Stone also struggles with languages that have no latin based alphabets, mainly because little to no explanation is provided on how a given writing system works.

If you're a beginner both courses are worth checking out

If you are completely new to language learning then it could be worth your time to try out both Rosetta Stone and Babbel. Honestly both methods have their merits and weaknesses.

Some users will appreciate the grammar lessons available in Babbel, while others may gravitate toward the immersive no English approach taken by Rosetta Stone.

At the end of the day someone with little to no knowledge of a foreign language has something to gain from each course.

Learners with more experience should look for other options

Rosetta Stone and Babbel both offer a foundational introduction to a foreign language. So you've already gotten your feet wet in your target language, then much of the content from these courses could be redundant.

Both courses bring learners to an upper beginner/low intermediate level(depending on the language and how many levels are offered). If you're at a higher level and comparing Rosetta Stone vs Babbel then you're asking the wrong question.

Alternatives to Babbel and Rosetta Stone

If you are a more advanced learner, you're looking for a method that focuses more on conversational skills, or you just don't seem to vibe with the methods of Rosetta Stone and Babbel; there are some other language learning options to consider...

Rocket Language courses are centered around audio conversations. Each lesson has English explanations and presents new vocabulary in "chunks" or phrases versus individual words (this is great for conversations).

Grammar is explained in the context of a lesson's conversations. Foreign alphabets and writing systems are also explained.

The Rocket Language method isn't as gradual as Babbel or Rosetta Stone's method. With Rocket Language you will move through a language faster and approach something closer to a intermediate level.

Overall Rocket French is a more comprehensive course that does a good job of incorporating speaking and listening, as well as reading and writing.

Second only perhaps to Rosetta Stone, Pimsleur is one of the biggest and longest standing names in language learning. Pimsleur courses are primarily audio courses.

Each lesson is about 30 minutes long and uses a unique question/recall/response technique to develop conversational skills. Users are required to answer questions and prompts while creating their own sentences in their target language.

The app also includes a reading portion where users are introduced to the phonetics of the language as well as the alphabet and writing system.

With Pimsleur users learn a functional vocabulary, develop their conversational abilities,  and gain a good understanding of the written language. It's available as a language learning app or audio lesson download.

Italki is an online market place that connects learners with language teachers for paid one-on-one classes via video or audio chat.

Lesson methods will vary widely based on the teacher you choose, but with over 10,000 teachers offering courses in more than 100 languages you will likely find the teacher that works best for you.

You can also connect with native speakers from around the world and practice your speaking skills for free!

*with a purchase of $20 or more. After you complete your first purchased lesson a credit of $10 will be added to your account

With some variations in method both Rosetta Stone and Babbel provide an easy way for new learners to grasp the foundations in a foreign language.

Depending on the language you're learning these courses can help you with the basics, but as your ability in the language improve you will want to consider other learning options.

You may want to use another resource alongside Babbel or Rosetta Stone if you're keen on developing your conversation skills, as both courses give little or no opportunity to their users to produce their own sentences or express their thoughts in a foreign language.

Both Babbel and Rosetta Stone have free trials so I recommend trying them out before you buy them to see which course is right for you! This concludes our review of Babbel vs Rosetta Stone.