3 Ways Yabla Will Improve Your Mandarin Chinese (A Full Review)

Mandarin Chinese may be one of the most rewarding foreign languages to learn. The whole experience of learning the language from the culture, the people, to the places is amazing.

But Mandarin is almost always mentioned among the hardest languages to learn alongside Japanese and Arabic. I’m not going to sugar coat things. Learning Chinese is hard and takes a lot of work.

While Yabla isn’t a cure for all of your learning problems, here’s 3 specific ways you can use the site to help you learn Chinese.

You can read a more in-depth review of the site here. This article is about how Yabla can specifically help students who are learning Mandarin Chinese.

Use: Language immersion through video for Mandarin

Time is up to you. Videos are 3-10 minutes long

Site and video player are easy to use

Videos are sorted by level of difficulty and subject.

Yabla is a site that helps you learn foreign languages through native videos. Overall Yabla is more of a tool than a full fledged language course. There isn't a lot of structure on the site, so you're free to jump around their videos.

But what Yabla lacks for in structure it makes up for in content. There are 1,000's of videos on the site, and each one was made in the foreign language its showcased for.

The site's features like slow playback, switchable subtitles, and a one click dictionary make it a great way to both learn new vocabulary and review what you already know (in fact Yabla has been used in multiple school systems).

All in all if you're looking for a great digital immersion option for a foreign language, Yabla is definitely worth looking at!

Subscription plans starting at $9.95 a month

If you’re learning Mandarin, you’re well aware that the tones can be pretty difficult. Yabla is a perfect tool for practicing them.

One of the best ways to master tones in Mandarin is to mimic or shadow native speakers. The slow playback, loop, and subtitles in the video player make it easy to dissect what you hear so that you can copy the sounds yourself.

Try playing a video back one piece at a time. Use the slow play option in Yabla’s video player to hear it at a reduced speed. Listen to the audio and try speaking along with it. Pay special attention to the speaker’s intonation and inflection. 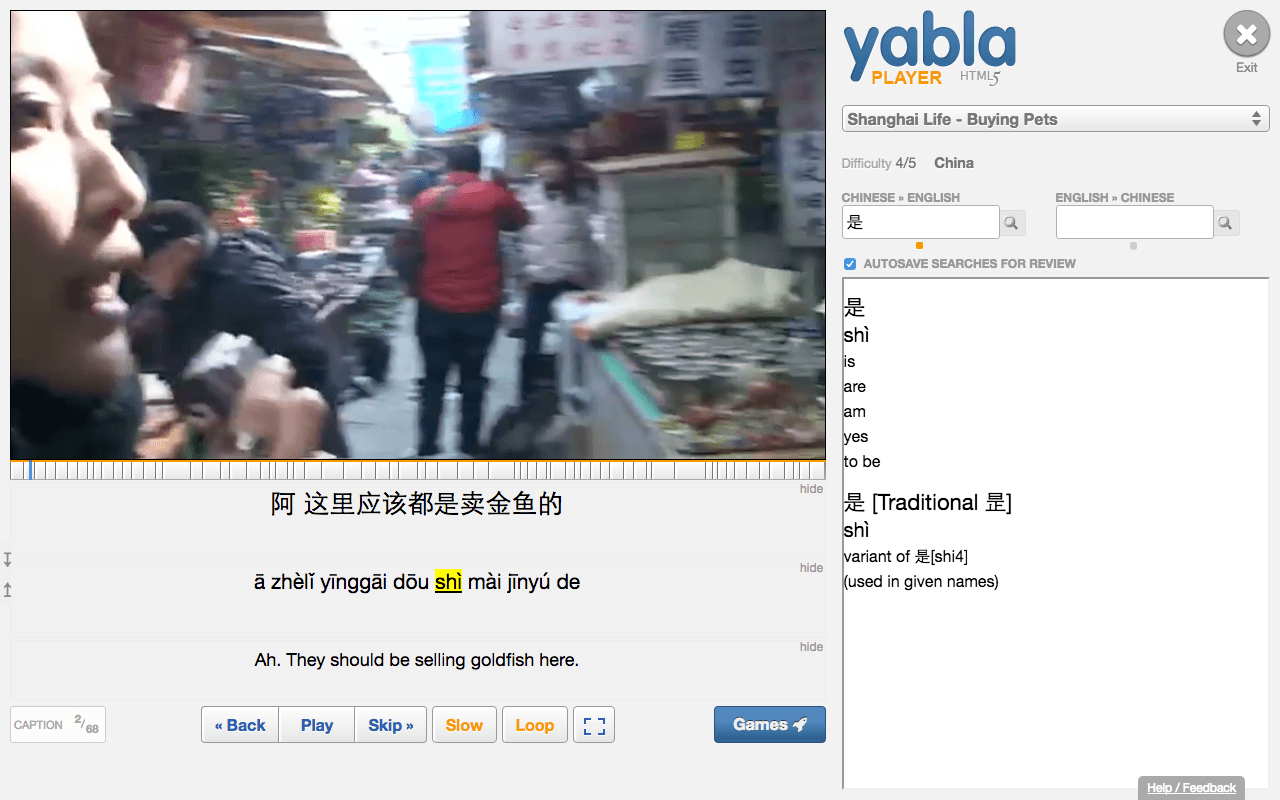 Next try saying it by yourself and play the video back to double check your tones and pronunciation. You can even try recording yourself and compare the recording to the video. This sort of vocal mimicry will help you internalize the tones of Mandarin.

2) It helps you memorize Chinese characters

Chinese characters are what make reading and writing in Chinese so tough. Chinese children are typically taught the script system through rote memorization over several years.

This isn’t a promising prospect if you’re learning Mandarin. Yabla can take some of the edge off the process. Of course you can watch videos with the traditional subtitles on and then add ones you don’t know to your flashcard deck to review later.

That’s all well and good, but try this to get more out of Yabla: Think of ways to associate characters with the context of the video you found them in. A great way to do this is to create flashcards in Anki and add a screenshot of the video scene where you first saw the word.

Pick a scene from the clip that best reminds you of the word. That way when you’ll see the script and the picture you’ll be able to recall the conversation the word was used in. This simple association can help you retain and remember the characters you learn. The more connections your brain can associate to the character the less likely you are to forget it.

Yabla is often used by schools to supplement their language programs

3) It helps immerse you in the language

The best thing about using Yabla to learn Mandarin is that it immerses you in the language. When you watch and interact with native Chinese video it forces your brain to activate the Mandarin you know. You can learn a new Mandarin word or grammar rule, but it’s a whole another thing to see it in action.

But the immersion also goes beyond your language skills. Because the videos are actually made in China you get a feel for the culture as well. It’s no replacement for a plane ticket, but it’s still a cool way to be exposed to the country.

Fluentu is a site that helps you learn a language through native videos, and it's very similar to Yabla (though slighty more expensive)

You can use in site flashcards, captions, and games to learn new words in context while watching Italian TV shows, movies, commercials, and more. It's a great way to push your listening skills and vocabulary.

Chineseclass101 features audio lessons in a podcast format. Lessons are great for grammar and vocabulary. Each lesson is designed around a Chinese conversation between native speakers, and the teachers do a great job of keeping things engaging.

It's more structured than Yabla and is substantial Mandarin learning tool The site features transcripts, an in-site flashcard system, and many other useful features.

Rocket Chinese is for those looking for a more in depth and comprehensive course for learning Mandarin. It does an excellent job of incorporating Chinese speaking and listening, as well as reading and writing. They even have special lesson just on Chinese characters.

Yabla isn’t a full fledged course for Mandarin, but if you use it right it’s a great learning tool. It’s also pretty affordable with a one month subscription starting at $9.95 for 1 month. The site also has some free demo videos in Chinese so you can get a feel for their platform. If you’re serious about learning Mandarin then it’s definitely worth checking out!