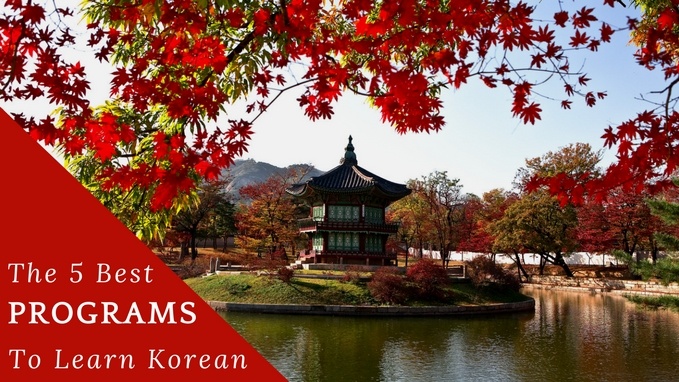 Finding a good Korean learning program can be tough.

Many language learning companies either don't make a Korean course at all, or they simply copy and paste Korean words and phrases into what used to be a Spanish or French course (seriously).

Linguistically Korean is it's own language, and it deserves to be treated as such. It's grammar and vocabulary are miles away from English. So when someone decides to make a good Korean course, they really have their work cut out for them.

To save you some trouble, and to keep you from wasting your precious time and money on a bad program, we made a list of the top 5 programs for learning Korean:

​​​​​...But before we get into why we chose these programs and not others, it's important to talk a little bit about what exactly makes a Korean course "good"...

What makes a good Korean program?

Below are the three attributes a great Korean program should have.

Like many other asian languages Korean's grammar is very different from that of English. Some of Korean's unique features include a subject-object-verb word order, a system of honorifics (aka politeness levels), and a complex system of tense, mood, and aspect for verbs.

A good Korean software or program will teach the language on its own terms.

2) It doesn't ignore honorifics in Korean

We mentioned the levels of politeness in Korean in our last point, as it is an important part of grammar. However a common problem among Korean courses is that, if they teach honorifics, they only teach the most formal level of the language.

Brief intro on the basics of Korean honorifics

This becomes a problem if you plan on speaking Korean conversationally, as most situations won't require overly polite language. A good Korean course will help you understand the difference between the different levels and when to use them.

3) It teaches the Korean writing system

More info on the Korean writing system and how it works

It's a shame that some courses ignore this distinct, yet beautiful (I think) part of the Korean language. A great Korean course should teach you how to read and write in Korean, as well as how to speak it.

Our picks for the top 5 Korean learning programs

Rocket Korean is built around recorded audio in the form of dialogues. The dialogues have English explanations and teach the language in "chunks" or phrases versus individual words (this is great for conversational Korean).

Rocket Korean errs on the side of more formal/polite Korean, but it does make the important distinction between levels of politeness.

What truly sets Rocket Korean apart is that it also focuses on literacy (not just being conversational). The course really breaks down the Korean alphabet and does a good job of teaching hangul (Korean's writing system).

Rocket Korean holds the number one spot on our list because it does an excellent job of teaching conversational Korean AND written Korean, while paying homage to politeness levels. I wish more Korean courses did the same!

Pimsleur is through and through an audio course (don't expect to learn how to read or write Korean with it). The program is split into 30 minute audio lessons built around a Korean dialogue between native speakers.

What makes Pimsleur different is its unique question-recall-response method. This method is very effective at getting you to think in a foreign language, much like you would in a real conversation.

In fact Pimsleur is the only Korean audio course I'm aware of that effectively develops your conversational skills.

Unfortunately though, in addition to writing, Pimsleur doesn't really teach the distinction between politeness levels in Korean. Nine times out of ten it uses the more formal Korean.

Still if you want to develop a functional (though very formal) vocabulary, while practicing your conversation skills, then Pimsleur might be worth a look. The course also includes a notable reading portion, which is also great.

Pimsleur is now available through app format, and for a monthly subscription of $14.95 you get access to all of their Korean courses. Pimsleur also offers a free one week trial, so you can try out the courses before you pay.

Koreanclass101 is technically closer to being an app than a program, but it's designed around audio lessons much like Rocket Korean. Koreanclass101 lacks the structure and comprehensiveness of Rocket Korean (but it's also a lot more affordable too).

Koreanclass101 is one of the most popular Korean learning resources on the web.

Their lessons are in the format of podcast episodes. Each episode features two hosts who breakdown and explain a conversation between two native Korean speakers.

The hosts do a good job of explaining difficult concepts, teaching relevant grammar, and keeping things light and interesting.

Lesson transcripts are available in English as well as Korean. There's also an in site flashcard system for learning new words and Korean letters.

Duolingo is often times the first program we recommend to language learners.

Their courses are known for being an effective and free way to master the fundamentals of a foreign language. Unfortunately though Duolingo Korean runs into some serious problems...

Duolingo Korean is still in beta, meaning it's available to use but the company is still working out the kinks.

So far the app makes no distinction between levels of formality and doesn't really teach hangul (even though hangul does make an appearance on the app).

Even with it's faults Duolingo Korean is definitely worth checking out (it is free to use after all). Hopefully with time the course will improve and we can put it higher on the list!

Fluentu is a site that helps you learn a language through native videos.

You can use in site flashcards, captions, and games to learn new words in context while watching Korean TV shows, movies, commercials, and more. It's a great way to push your listening skills and vocabulary.

Unfortunately though, Fluentu isn't structured or comprehensive enough to be considered a full fledged course or learning program. It's really more of a tool or secondary resource.

It doesn't explicitly teach the language, the site works more as way for you to practice and build on what you already know. That's why it comes in at number five on our list.

Because of how different it is to English, Korean sometimes gets the short end of the stick when it comes to language courses. It can be hard to find a program, course, app, etc for this language.

Still, if you know where to look you can find some solid options. I hope you found this list helpful. Don't let a lack of good learning programs keep you from learning Korean!

In the end persistence, consistancy, and a genuine love for the language will be the keys to your success, not a particular method or course!