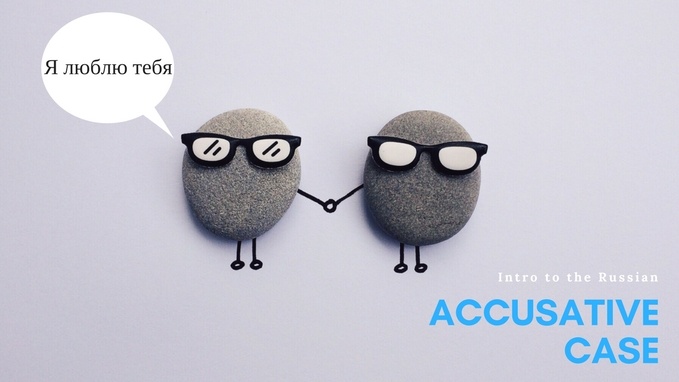 Intro to the Russian Accusative Case

Word order matters a lot in English. If we change the word order of an English sentence, its meaning could drastically change as well. Take a look at the two sentences below:

The dogs bites the man.

The man bites the dog.

In both sentences the exact same four words are used, yet you'll notice that the order of the words changes the meaning of the sentence entirely. In English we can tell which word is the subject (who's doing the biting) and which is the object (who's being bitten) by word order.

In Russian the distinction between subject and object are just as important, but word order isn't used to show which is which. Instead of word order Russian uses endings to show who or what is carrying out the action (subject) and who or what is being acted upon (object).

Take these two sentences for example. Let's say we have two people: Boris (Борис) and Olga (Ольга). In Russian we could say:

We could also say or write the same idea like this:

In both sentences Ольга gets the accusative ending Ольгу. It's because of this ending that we know that Olga is the one being loved and not Boris.

This system of word endings makes the word order in Russian quite flexible. Word order won't change the principle meaning of a given sentence, but it may add or imply a different emphasis.

Noun endings in the accusative case

Here's some examples to illustrate this rule:

Masculine and neuter nouns don't change ending in the accusative case (unless they're an animate noun, which we'll touch on in a little while). This is great for us Russian learners. It's one less ending we have to remember!

Here we see no change in the plural endings even if the word is feminine, neuter, or masculine.

It's important to point out here that all the words in the above table have one important thing in common. To see what that this let's look at their English translations.

So what exactly do suitcases, cities, books, and windows have in common? They're all inanimate objects (they're not alive).

Animate nouns in the accusative case

In Russian plural nouns will not change their ending if they are inanimate objects. They will however change if they are animate (something that is alive).

Animate masculine nouns in the accusative case have the same ending as in the genitive case.

In the above table we have the words student (male) and rabbit. Both are masculine, and both are animate. To decline them in the accusative case we use the same endings we would use in the genitive case.

When I first learned the accusative case my head spun. Individually the exceptions were simple enough and easy to understand. However when I put them all together to try to use the accusative case I felt like I was trying to juggle too many things at one time.

My accusative nouns were filled with mistakes. One thing that helped me was to focus on one set of rules at a time. First I concentrated on remembering the endings of singular feminine nouns.

When you take the accusative case endings one at a time, they seem a lot less intimidating. Sooner rather than later you'll find yourself using them without thinking! It just takes a little dedicated practice.