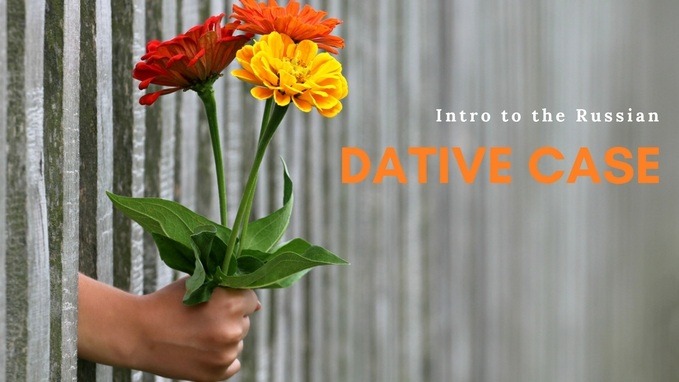 Intro to the Russian Dative Case

If I'm honest the dative case was one of the most challenging cases for me to use when I first started learning Russian. The case is used in a variety of ways, not all of which make that much sense when translated to English (at least for me anyways).

I think the biggest reason I struggled with the dative was because I never really sat down to learn the rules of the case: how it was used, the correct noun endings, etc.

In this post we'll save you from making that same mistake. First we'll look at some of the common ways the dative case is used. After that we'll look at the rules for noun endings.

Common uses of the dative case

The dative case is commonly used to describe the physical or emotional state of a person. Here are a few examples:

the friend (male) is cold

a brother is bored

Note how statements in the dative like брату скучно (brother is bored) and подруге плохо (friend feels bad) differ in meaning  from statements like скучный брат (boring brother) or плохая подруга (bad friend).

I called my brother*.

*We use the dative case for "my brother", because "my brother" is the one who was called.

Here's some of the more common verbs used with the dative case:

The above list is by no mean exhaustive. Here's a more comprehensive list of verbs used with the dative case.

After the preposition "k"

Here are some examples of how we can use the dative case with the preposition k:

He does to the doctor.

We fly to friends.

After the preposition по

We use the dative case after the preposition по. This preposition has several meanings. We can use to по to mean something similar to "by" in statements like:

Lit: "to talk by telephone" (to talk on the phone)

lit: "to search by internet" (to search on the internet)

The preposition по can also be used to mean "through". Examples include:

He goes through the street

We walk through the city.

as in "on" (as in the case of a school subject)

Another use of the dative case with по is for the English preposition of "on" in statements like:

The text book on french

The lesson on math

When talking about age

When we mention someone's age we also use the dative case:

The basic dative case ending for masculine and neuter nouns is -у for hard stem endings and -ю for soft stem endings.

The basic ending for feminine nouns in the dative case is -е. We will use this ending for both hard and soft stem endings.

One exception for feminine nouns

Plural nouns endings in the dative

The dative can seem a bit mysterious, but a little knowledge and practice will help you cut through the fog. I recommend focusing on the more common uses of the case and then moving on to other users.

Little by little you'll see yourself become for comfortable with this case the more you use it!