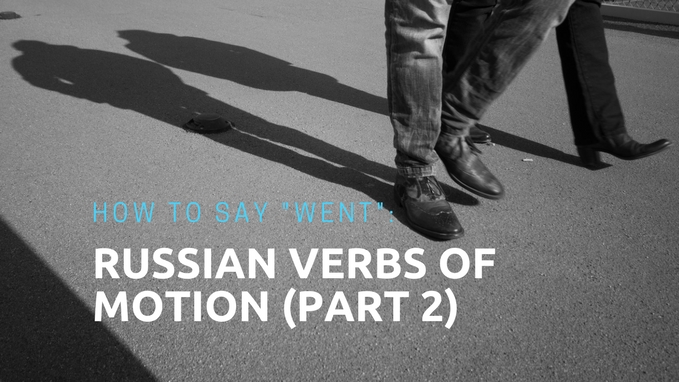 In our last post we talked about how Russian makes a distinction between going once in a single direction and going multiple times in one or more directions. We also saw how Russian distinguishes going on foot and going on vehicle.

In this post we'll build on these ideas as we discuss how to talk about motion in the past.

We'll start by looking at the past forms for going on foot.

If you remember from our last post ходить represents motion on foot that happens more than once in one or more directions. It can also refer to one or more round trips or a single trip in multiple directions.

When to use ходить in the past

So the use of ходить is pretty straight forward. Shouldn't идти be just as simple? Well not quite...

To talk about a trip on foot where the person hasn't (or won't) return, we actually use the past tense of a different verb altogether: пойти. If you have no idea why we're using a completely different verb here don't freak out.

If you're familiar with verbal aspect then you should remember that a single completed movement in the past calls for a perfective verb. Again, if you don't know what we're talking about don't worry about it. If you're curious you check out our post on verbal aspect.

Here are the past tense conjugations for пойти:

When to use пойти in the past tense

Now we'll discuss how to use "went" when talking about movement by transport.

Similar to ходить, ездить is used to describe motion that happens more than once in one or more directions. The chief difference is that ездить represents "going" by some means of transport (car, train, plane), instead of by foot.

Just as ходить is fairly easy to use in the past tense so is ездить. Here are past tense conjugations for ездить:

When to use ездить in the past tense

Remember how instead of идти we used the perfective verb пойти to describe a single complete motion in the past? We have a similar situation with ехать.

When we talk about a completed motion in the past (by transport) we will use the past tense of поехать not ехать (again if you've haven't learned about perfective and imperfective verbs don't sweat it). Here are the past tense conjugation for поехать:

When to use поехать in the past tense

If you're already comfortable in making the distinction between going by foot and going by transport, the past tense of these verbs aren't that difficult.

The hardest part is remembering to use the perfective verbs пойти and поехать. Once you get used to that everything is pretty straight forward!